Hudson, Texas Distance Runner Signs On with University of Tulsa 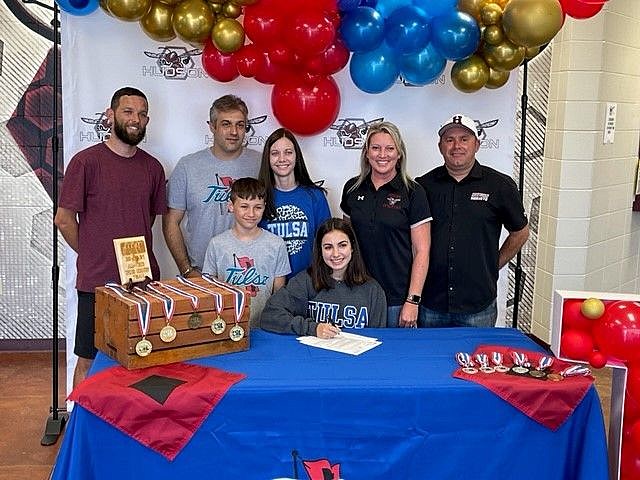 For the past four years, Hudson's Kayleigh Wagnon has been collecting medals and making milestones as a distance runner for the Hornets. Today, gathered by a multitude of family, friends, teammates and coaches in the foyer of the Hudson Gym, Wagnon officially signed the dotted line to became the newest member of the University of Tulsa Cross Country team.

The Hornet senior had numerous college offers but had pared the choices down to Portland State, Texas Tech, Ouachita Baptist, UNC-Asheville, and Central Arkansas among others. In the end Wagnon decided to become a Golden Hurricane.

The achievements through her high school career are numerous. She has several district, area and regional championships to her credit in both cross country and track. She has quite the trove of gold medals from numerous cross country meets, and most recently she finished in the top five at the state cross country meet in Round Rock while running an 11:31 in the two-mile race.

Wagnon is not done with collecting medals and championships at Hudson just yet. Track and Field season is a couple months away and last year she qualified for state in Austin in both the 1600 meter and 3200 meter runs.

Kayleigh Wagnon is coached at Hudson High School by Amy Stewart, Josh Stewart and Robert Smith. Her parents are Kelly and Amber Wagnon.
Reactions: TU 1978 and TU83
You must log in or register to reply here.